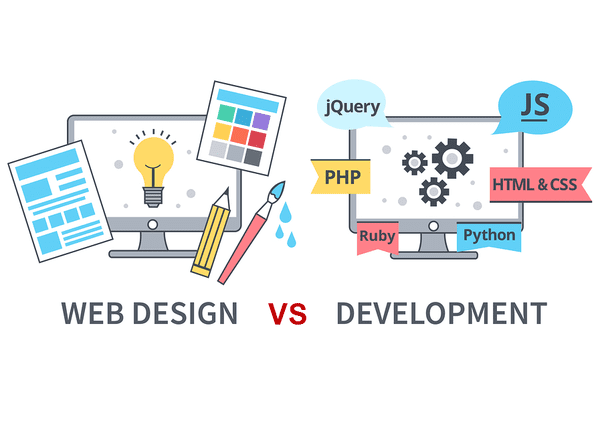 A web designer is a graphic artist who is responsible for designing the layout, usability, and visual appearance of a website. A successful web designer must possess an array of creative, graphic, and technical skills.

A web developer is someone who builds and maintains the core structure of a website. They’re tasked with converting the web design into a functional website, using coding languages such as HTML, JavaScript, PHP, and Python.

The Role of a Web Designer

Web designers have a varied set of tasks and responsibilities. However, a designer’s role revolves around creating the layout and visual aspects of a website.

Their goal is often to make sure the site is both visually pleasing and user friendly and encourages visitors to stay around for as long as possible. In addition to the general framework and layout structure, this also means considering and constructing conversion-generating elements, as well as designing web pages in a way that translates well across various devices.

Web designers need to stay updated on the latest web design trends and adhere to certain standards and best practices. They often deal with brand imagery, color palettes, fonts, and so on. Many will even create a web design style guide to ensure that each website looks consistent:

There are a handful of other key documents and resources that designers are charged with creating, administering, and overseeing. This includes:

There’s also a fair amount of research and testing involved in a web designer’s job. It’s important to make sure the website is designed in a way that meets users’ expectations and client specifications.

Additionally, a web designer will need to consider how their design affects the coding of the website. Designers create a site structure and mockup, which developers then bring to life by coding the site.

There are different types of web designers, each focusing on a unique and specific type of work. These are:

UX designers help ensure the website is structured in a way that engages visitors and delivers a positive experience. Their role is to create human-centric designs that are based on data-driven decisions. This involves conducting a lot of research and testing to gather and analyze data, which is used to inform their final design choices.

UI designers also play an important role in the design of a website. In addition to the experience it provides, they also prioritize interactions. More specifically, their role is to enhance the usability of a website and optimize it in a way that helps encourage conversions.

Visual designers, as the title suggests, work with the layout and visual elements of a website. This work combines certain aspects of both UX and UI design. The duties of a visual designer are based on ensuring that the interface is both aesthetically pleasing and easy to use.

Most web designers use a handful of tools, software, and programs to perform their tasks. The most important of these are design and editing software and programs, such as Adobe Photoshop.

The skill sets web designers require to be successful vary, depending on each person’s specific role and specialty. However, generally speaking, some important skills include:

The Role of a Web Developer

A web developer’s primary job is to build and maintain the core structure of a website. Their role involves a lot of technical work, including using complex coding and advanced programming languages. In a nutshell, they take the ideas and concepts laid out by designers and turn them into real, live, and fully-functioning websites.

More specifically, the duties of a web developer involve constructing the website itself. This includes coding and configuring the server and databases on the back end, as well as incorporating user-facing features and functionality. They also perform testing and debugging and may handle an array of post-launch services, such as providing ongoing support and maintenance and fixing server or hosting issues.

To better understand the role of a web developer, it might help to compare it to another field, such as construction. A web developer is to a website what a construction company is to a new house. The developer takes the design plans and blueprints drafted by the architect (web designer) and lays the foundation to ensure that there is a functional, sound structure in place.

Typically, web developers focus on a handful of programming languages. The languages they use, however, will depend on the type of web development work they do.

There are three major kinds of web developers:

Front-end developers code the actual website using CSS, HTML, JavaScript, and other languages, as well as Content Management Systems (CMS) such as WordPress. Front-end development, also known as client-side development, largely involves coding and programming the visual elements of a website that users will see. As such, there is a fair amount of overlap and collaboration between front-end developers and web designers.

Back-end developers code the database and server using advanced programming languages such as PHP, C#, Java, Ruby, and SQL, as well as NodeJS and other server-side frameworks. Back-end development, also known as server-side development, mainly encompasses the aspects of the website happening ‘behind the scenes’, which visitors don’t see from the front end.

Finally, full-stack developers code both the front and back end of a website. They have a solid understanding of how these parts work and function together. In addition to coding web pages using CSS, HTML, and JavaScript, full-stack developers also set up and configure servers, code Application Programming Interfaces (APIs), query databases, and more.

As we touched on above, web developers require certain technical skill sets to fulfill their roles. At the least, a web developer will need to be knowledgeable in:

In addition to technical skills, there are also non-technical skill sets that come in handy as a web developer. This includes problem-solving and analytical thinking, which can be useful during the debugging process. It’s also important to have solid communication and collaboration skills for working with clients and other key parties (such as web designers). 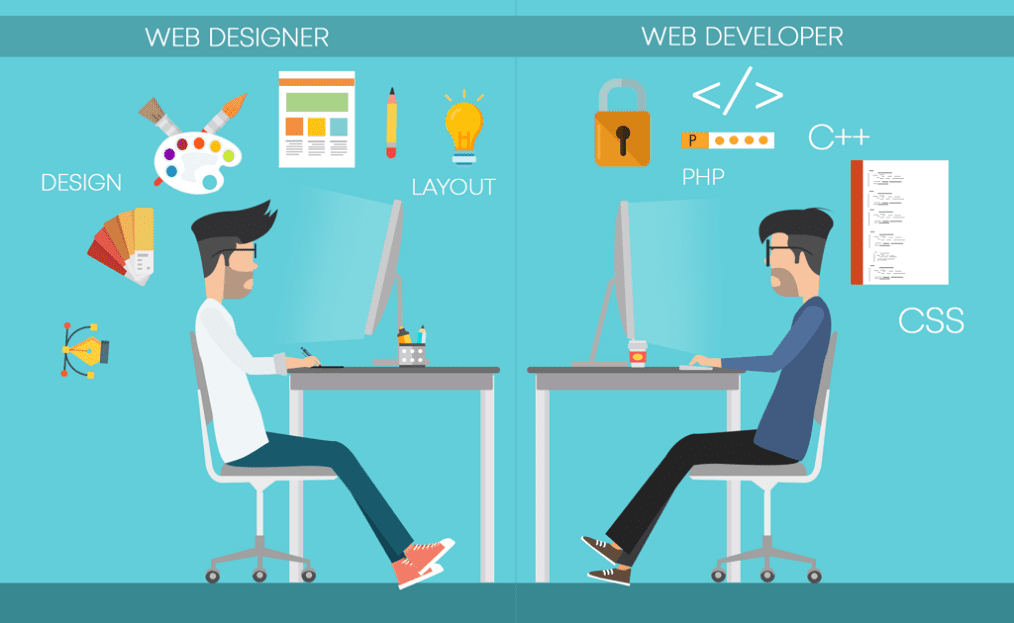 Hopefully, you now have a better understanding of the key differences between a web designer vs. a web developer. To bring everything together, let’s take a look at a quick breakdown of the biggest distinctions between these two roles:

What makes a web designer perfect?
Scroll to top

Because these cookies are strictly necessary to deliver the website, refusing them will have impact how our site functions. You always can block or delete cookies by changing your browser settings and force blocking all cookies on this website. But this will always prompt you to accept/refuse cookies when revisiting our site.